ECA GROUP has contracted CTM and PATRIA to supply two minesweeping subsystems that will be towed with its INSPECTOR 125-S Unmanned Surface Vehicle (USV). The fully integrated solution will provide enhanced multi-influence minesweeping capabilities within the Mine Counter Measures replacement (rMCM) programme awarded by Belgium and the Netherlands to the Belgium Naval & Robotics consortium, composed of Naval Group and ECA GROUP. 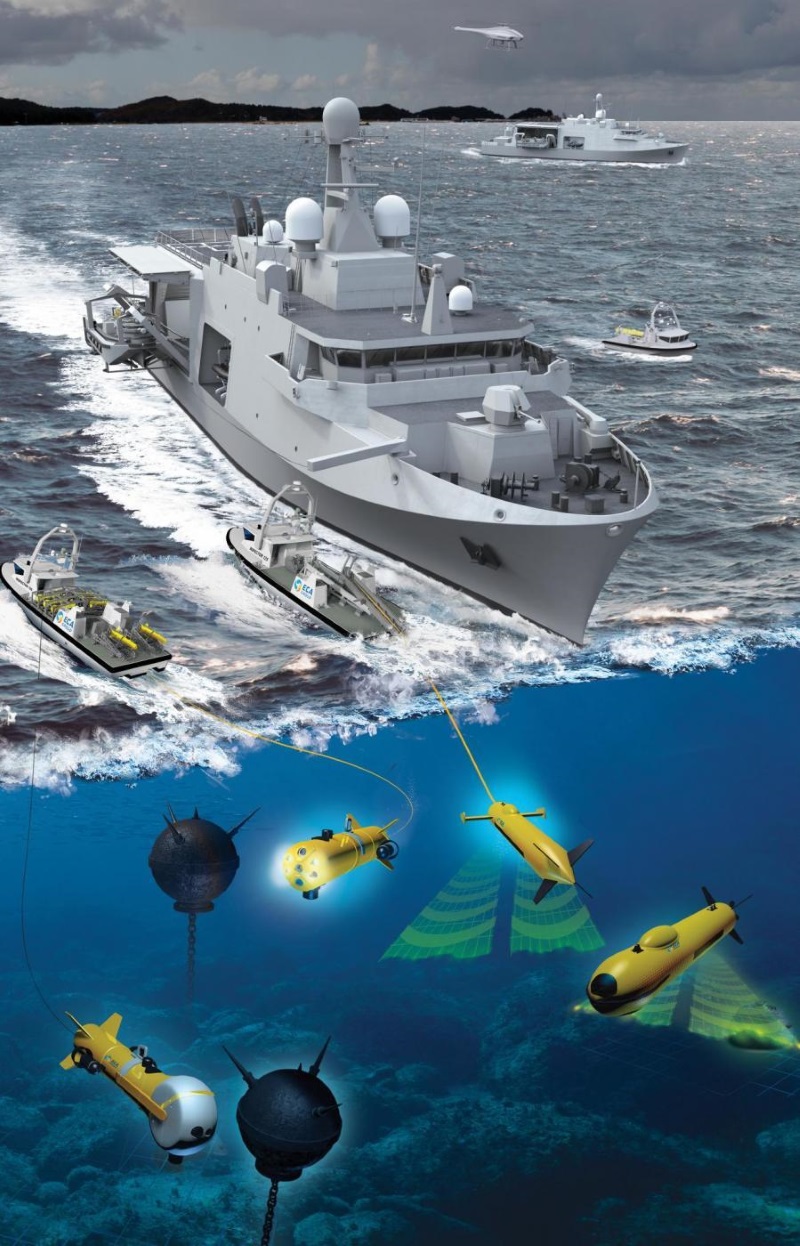 ECA GROUP will develop a fully-integrated hardware and software system composed of its INSPECTOR 125-S USV, the minesweeping modules from CTM and PATRIA, an electrical power generator and a release connector creating a complete turnkey influence minesweeping solution. The value and uniqueness of ECA GROUP’s offer resides in its capacity to provide an A-Z solution, ensuring the inter-compatibility of equipment and software components, managing software implementation and the man-machine interface that will be used for mission preparation and execution, developing the STS (sweep tracking system), and performing the overall system integration. In addition, ECA GROUP is also developing the launching and recovery procedures from the shore and the mothership, taking in charge the development of associated equipment, namely the slipway and winch.

The INSPECTOR 125-S USV has a maximum speed of 13 knots. It is a robust platform and has a low magnetic and acoustic signature to prevent mine triggering. In addition, its unsinkability keeps it afloat in the unlikely event of a mine explosion nearby.

The INSPECTOR 125-S allows the sweep to be towed at up to 8 knots by a 160m cable to ensure that the USV remains far enough away from any mine explosions.

CTM’s system allows the generation of electromagnetic signatures while PATRIA’s system enables acoustic signature generation. They allow the mine fuses to be jammed or activated, depending on the desired effect for three different modes.

For the Target Simulation Mode, the multi-influence minesweeping system will simulate, or ‘mimic’, the electromagnetic and acoustic signatures of multiple types of ships, as required by the customer navy, and materialised by the characteristics entered into the mission management system.

2 other mine sweeping modes are available:

Mine Jamming Mode – used for generating a sound and magnetic field which will jam the mine’s detection capability, preventing it from reacting.
Mine Setting Mode – when the mines are known, this mode is deployed on the basis of electromagnetic and acoustic signatures of the mines targeted during the mission.
ECA GROUP will take delivery of the subsystems from PATRIA and CTM in the first semester of 2023. The final, complete solution integrating CTM and PATRIA modules will be presented to the Belgian and Royal Netherlands Navies by the BNR consortium during the first semester of 2024 following a comprehensive phase of tests and sea trials.

“The collaboration with CTM and PATRIA will enable ECA GROUP, within the framework of Belgium Naval & Robotics, to supply the Belgian and Royal Netherlands navies with state-of-the-art, integrated mine-sweeping capabilities, equipping them to face the challenges of modern naval mines” said Jean-Louis Sambarino, Programme Director, ECA GROUP.