Kraken Robotics Inc., Canada’s Ocean Company™, is pleased to announce that it has signed a cooperation agreement with SH Defense (SHD) of Denmark covering the design and sale of containerized mine countermeasure and other subsea surveillance sensor and robotic solutions. 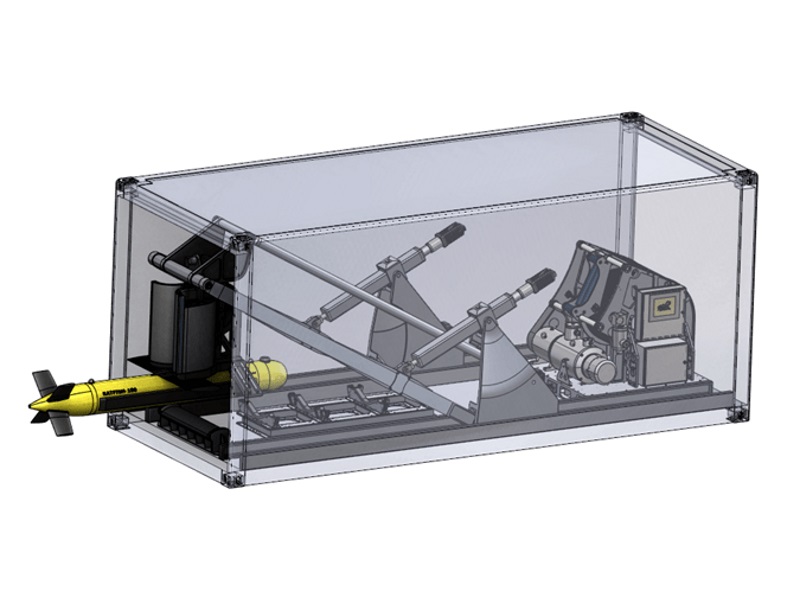 SHD is an international company developing, producing and servicing hydraulic, electric and mechanical system solutions, including containerized multi-mission module systems for the worldwide naval industry. SHD manufactures The Cube™, a next generation evolution of StanFlex containers.

The benefits of such containerized modules are numerous and include:
*Unused modules can be stored in controlled conditions, reducing the need for preventative maintenance,
*Ships do not need to be taken out of service when equipment requires maintenance,
*New systems can be installed on vessels by fitting them to a module, instead of refitting the entire ship,
*When a ship is removed from service, the modules can be reused by other vessels, and
*The multi-role ships can be quickly re-equipped for other roles.

Today’s global naval operating environment requires navies to increase not only their range into new operating theaters like the Arctic, but also to extend their platform capabilities and to operate more autonomous and remotely piloted systems to provide enhanced maritime domain awareness and operational capabilities. Ship builders are designing in this flexibility and interoperability by including flexible accommodation for containerized mission systems and an Offshore Patrol Vessel (OPV) is an example of this.

An OPV is a surface ship designed for coastal operations, including both defence (i.e. naval mine countermeasures) and constabulary roles. By using containerized solution modules that can be rapidly exchanged, these warships can deploy with mission agility and quickly convert to tackle a range of other roles such as maritime security, border control, anti-smuggling, counter-terrorism, disaster relief and more.

OPVs are the fastest growing segment of nation-owned fleets and worldwide demand for OPVs has proliferated in recent years. OPVs allow governments to share platforms across government agencies as seen in Canada with the AOPS design being shared between the Royal Canadian Navy and the Canadian Coast Guard. Tensions from the Mediterranean Sea to the South China Sea, coupled with the multiple low-cost capabilities offered by OPVs, are key factors behind their increasing success. For waters in the Middle East, OPVs are seen as one of the main solutions to growing piracy concerns and efforts to protect economic interests.

Market analysts, Market Watch, estimate that in 2020 the global Offshore Patrol Vessels market was valued at over US$24 billion and is expected to reach over US$44 billion by the end of 2026, growing at a CAGR of 8.7% during the period.

The market for OPVs is buoyant as countries seek to modernize, upgrade and replace platforms to keep pace with technology change and the evolving threat spectrum. When coupled with rapidly exchangeable containerized payloads, OPV will enable nations to move quickly and easily between roles and missions. Further, containerized mission specific payloads can quickly be shared between other platforms within a country’s existing fleet or of an allied nation.