The world’s deepest diving acrylic hulled manned submersible is to be equipped with Sonardyne’s BlueComm optical communications link to allow live streaming of deep ocean expeditions anywhere in the world. 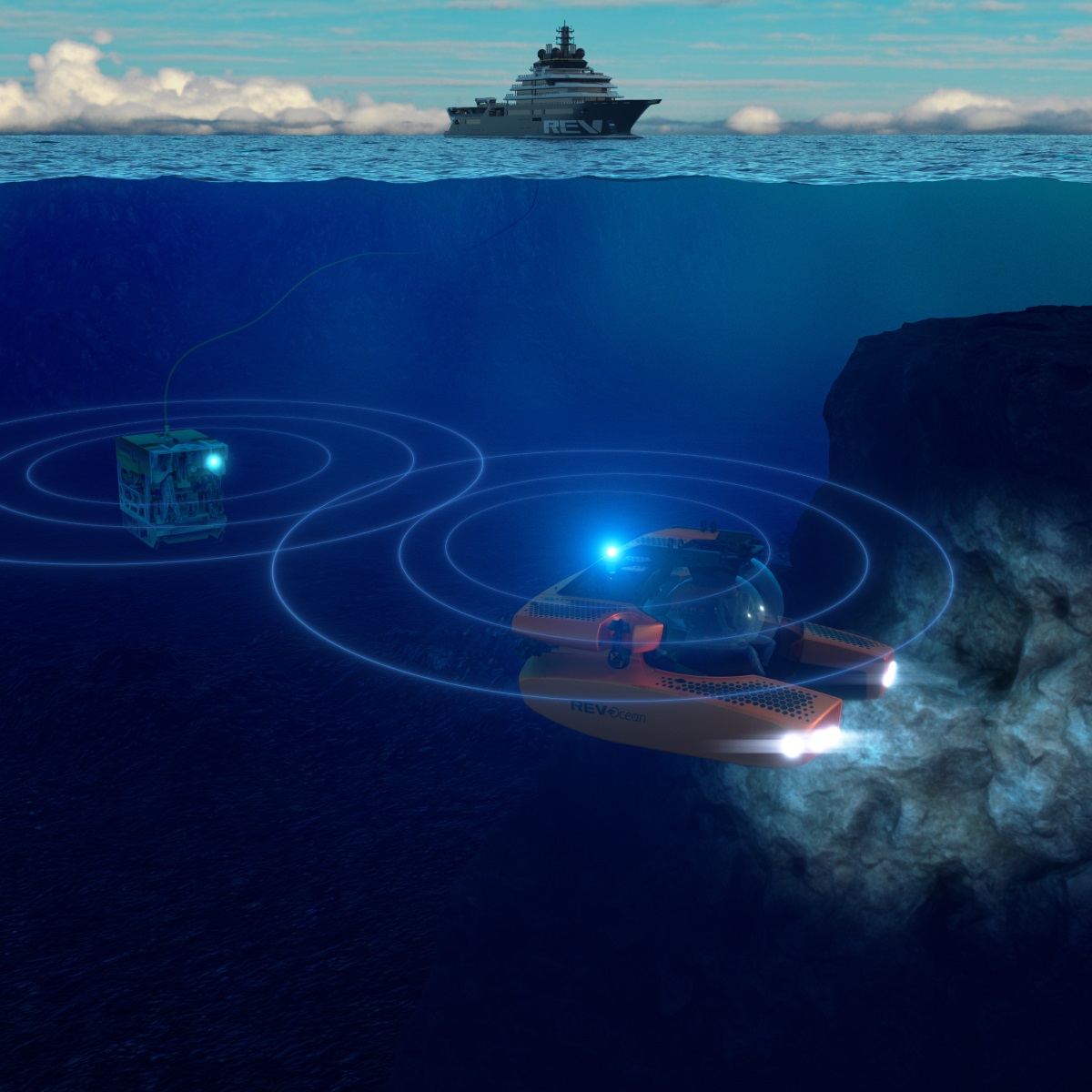 Underwater research re-imagined. Sonardyne’s BlueComm will unlock opportunities to share ocean science from onboard the REV Ocean. Image from Sonardyne.

The Triton 7500/3 series submersible will operate from REV Ocean, one of the world’s most advanced research vessels, currently under construction for the Norwegian non-profit organisation of the same name.

BlueComm will allow the occupants of the Triton submersible to live stream high-definition video and audio to the surface, including to those on board the vessel’s 35-person auditorium or even website and television audiences worldwide, to share first-hand in their experience.

The Triton 7500/3 is the only acrylic hulled submersible able to carry up to three people down to 2,286 m water depth. BlueComm will support its missions by transmitting data using high power light emitting diodes (LEDs) that are rapidly modulated.

Most underwater data transmission is done using acoustic signals, because of the ability of sound to travel long distances, measuring many kilometres, through water. But the bandwidth available using acoustics is not wide enough for high-definition video. By using light, BlueComm is able to stream up to 10 Mbps over up to 150 m.

REV Ocean’s Triton 7500/3 is being built by Triton Submarines, builders of the first fully accredited (DNV/GL) submersible capable of diving to full ocean depth. The Triton’s unique pressure hull is being made of acrylic, which is over 300 mm (1 foot) thick and offers passengers a 360 degree and unobstructed view of the ocean during dives of up to 12 hours in duration. The design uses certified, aircraft-grade materials, Lithium-ion battery technology as well as pressure-balanced and oil-filled sub-systems to achieve its remarkable depth capabilities.

This is the latest application of BlueComm onboard a Triton submersible. In 2019, the Nekton Foundation used BlueComm to conduct the world’s first live streaming to global audiences from a submersible during their First Descent expedition in the Indian Ocean. This was quickly followed by the world’s first presidential address from a manned submersible, on the same mission. Both milestones were undertaken using a Triton 1000/2.

“Triton is delighted to be working with the talented and resourceful team at Sonardyne again,” says Patrick Lahey, Triton Submarines’ President. “The Sonardyne BlueComm system is an example of a transformative technology, which dramatically enhances the effectiveness and utility of our entire range of human occupied vehicles. Project REV is a very ambitious ocean exploration project aimed at furthering our knowledge and understanding of the ocean and the Sonardyne BlueComm system is a critical part of capturing the essence of what it is like to be on a dive in human occupied vehicle with remarkable accuracy and quality. The content made possible by the BlueComm system will dramatically enhance the viewing experience for the audience by making it both more powerful and compelling.”

“Through-water communication using BlueComm not only provides a reliable alternative to using cables underwater, which can be expensive to install and vulnerable to damage, for projects like this, it also provides the freedom for scientific vehicles and their occupants to explore the deepest seas and oceans yet still be connected with the surface,” says Geraint West, Global Business Manager, Oceanographic, at Sonardyne. “Nekton’s First Descent Mission in 2019 illustrated BlueComm’s unique ability to bring ocean conservation directly into peoples’ homes, furthering education and understanding. We’re delighted that BlueComm will now play an integral part in supporting the REV Ocean team during their future science cruises.”

Alex Rogers, the Science Director of REV Ocean said “BlueComm is a revolutionary technology enabling live transmission of submersible dives to audiences around the world. It can truly convey the excitement of ocean exploration as demonstrated last year in the Indian ocean by the Nekton Foundation. For REV Ocean it is a great asset for ocean literacy, educating civil society and policy makers about the beauty and value of the deep ocean but also about threats such as plastic pollution, ghost nets and disruption from the changing climate. It also enables scientists on our mothership or even back on land to remotely participate in dives even though they are not physically present.”
Tags: sonardynebluecommtriton 7500/3 series submersiblerev oceannekton foundationtriton 1000/2