Attempting to relocate underwater objects in open ocean or a low visibility environment can be a difficult and time consuming task. Acoustic pingers and transponders solve this problem. These acoustic beacons are attached to an underwater site or instrument package and transmit a sonar signal. A gun-like device, either carried by a diver or deployed from a boat, detects the signal and guides the operator directly to the beacon. Today these acoustic devices are being employed by many marine scientists and researchers to keep track of expensive oceanographic equipment allowing instruments to be quickly relocated and retrieved. 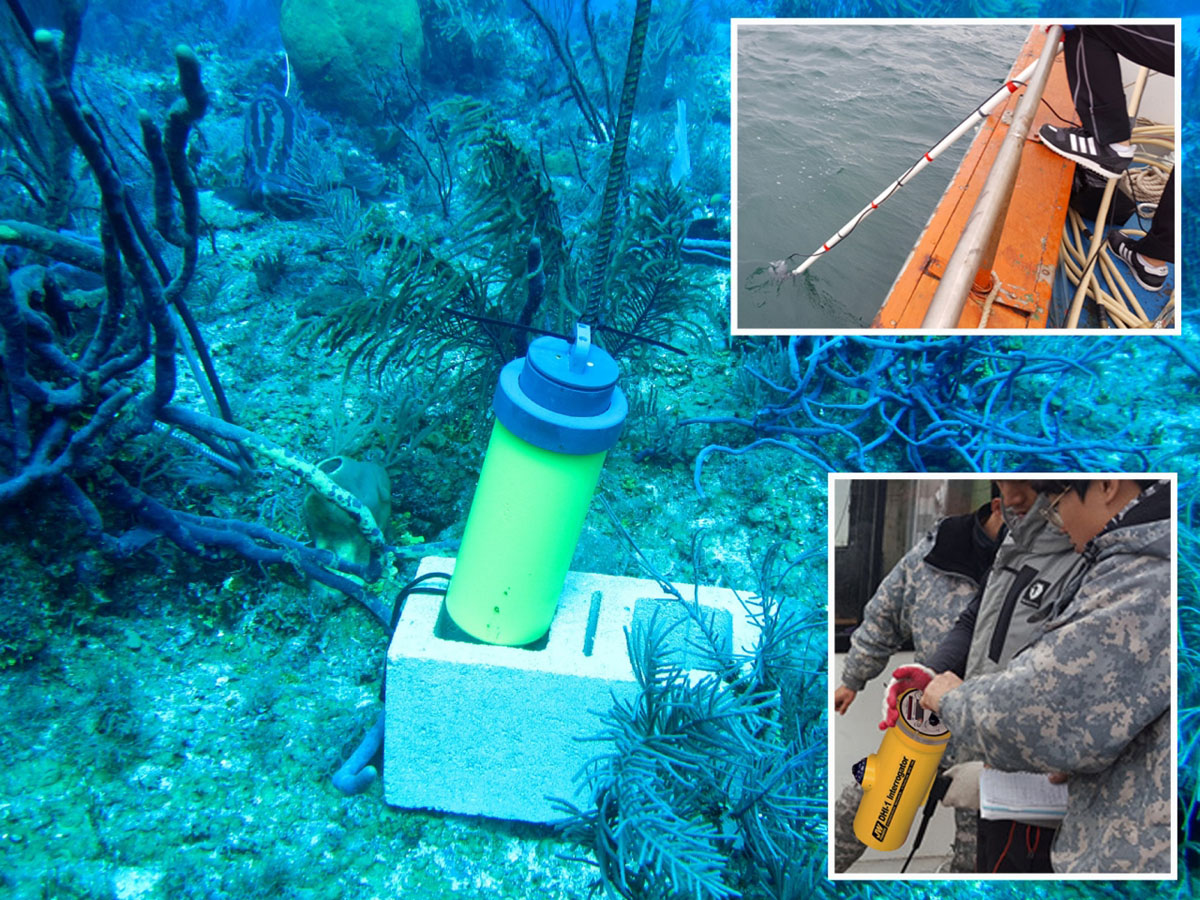 Scripps Institution of Oceanography (SIO) is one of the oldest and largest facilities in the world for ocean science research. A department of the University of California in San Diego, SIO’s mission is; “To seek, teach, and communicate scientific understanding of the oceans, atmosphere, Earth, and other planets for the benefit of society and the environment.” Dr. Ana Sirovic, an assistant researcher at SIO’s Marine Bioacoustic Lab, studies the effects of ocean noise on marine life. On a research project in the Cayman Islands studying the spawning behavior of the Nassau grouper, Dr. Sirovic deployed an array of hydrophones to listen to the sounds of the underwater environment. To ensure the hydrophones could be easily relocated, their position was marked with a JW Fishers SFP-1 acoustic pinger. “In addition to marking the location, the pinger was also useful in synchronizing the clocks on the array hydrophones” reports Dr. Sirovic.

The Naval Engineering and Test Establishment (NETE) located in Lasalle, Quebec is the Royal Canadian Navy’s principal test and evaluation center. NETE is a government-owned-contractor-operated (GOCO) organization providing a broad range of multidisciplinary services directed at naval equipment, combat, and control systems. Their mission is to provide independent and expert testing and evaluation of naval material supplied to the Canadian Forces. To assist in these operations NETE is using several of Fishers MLFP-1 low frequency pingers. The primary advantage of these pingers is their low frequency acoustic signal can be detected at a distance of 5 - 10 kilometers. This is a very important feature when deploying mobile equipment in open ocean where the ultimate location may be unknown, and retrieval is essential.

The Prince William Sound Science Center is an independent, non-profit research and education organization based in Cordova, Alaska, an area that has been called “Home of the world’s richest waters”. Changes in the ocean environment, such as fluctuations in water temperature, salinity, turbidity, and biochemical dynamics, can have a significant impact on the availability nutrients for marine life. Scientists monitor these environmental indicators to determine when changes occur and why. Researchers are also monitoring the area affected by the Exxon Valdez oil spill to assess how well the ecosystem is recovering and the accident’s long term effects. The center’s scientists are using a variety of instruments to gather data including the autonomous moored profiler which travels on a cable between the surface and the seafloor taking measurements. Another key device is the CTD probe which is deployed from a surface vessel and lowered on a cable to the bottom. The probe measures the seawater’s conductivity and temperature at various depths. To ensure their oceanographic instruments can be safely recovered, the center has acquired a SFP-1 acoustic pinger.


For more information on any of Fishers acoustic devices or other underwater search systems please visit our new website - www.jwfishers.com.