Kraken Robotics Inc. (TSX-V: PNG, OTCQB: KRKNF), Canada’s Ocean Company, is very pleased to acknowledge the support and recognition of the Government of Canada regarding its recent mine countermeasures system contract bookings with important NATO allies Denmark and Poland. 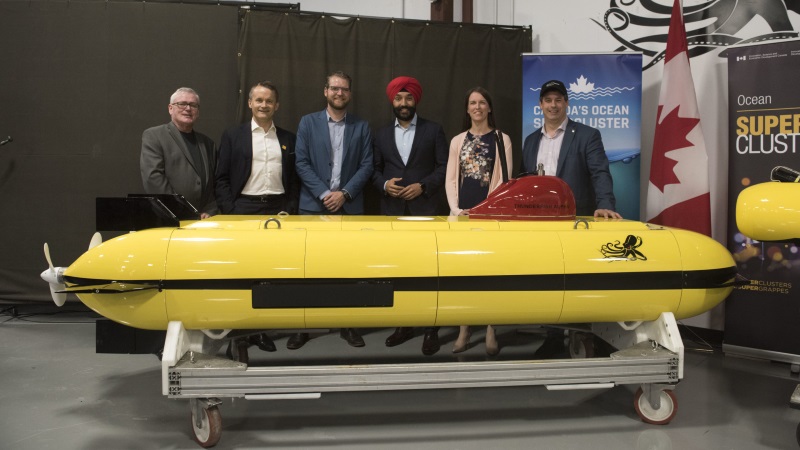 
On September 8, Kraken announced the signing of two strategically important contracts for mine hunting equipment with the Danish Navy and with the Polish Navy. Kraken will deliver its KATFISH™ towed Synthetic Aperture Sonar, Tentacle® Winch and Autonomous Launch and Recovery System (ALARS) to both NATO navies over the next two years. These products are designed and manufactured in Atlantic Canada; the KATFISH™ and the Synthetic Aperture Sonar is built in Mount Pearl, NL and the Tentacle® Winch and ALARS are built in Dartmouth, NS.

Karl Kenny, Kraken President and CEO noted: “Kraken would like to acknowledge and thank the Government of Canada for their support stemming from Canada’s innovation agenda, and in particular the Key Industrial Capabilities (KICs) strategy and the various supporting programs and initiatives including National Research Council of Canada Industrial Research Assistance Program and Canada’s Ocean Supercluster. Kraken’s strategy is to continue leveraging these government programs to drive innovation to further grow the company and generate additional export sales.”

“In order to ensure that more of these investments continue to support the development of a globally-competitive defence and security sector, the Government of Canada has identified 16 KICs including Remotely-piloted Systems and Autonomous Technologies, and Sonar and Acoustic Systems. The KICs represent areas of emerging technology with the potential for rapid growth and significant opportunities, established capabilities where Canada is globally competitive, and areas where domestic capacity is essential to national security.”

Minister of Innovation, Science and Industry Hon. Navdeep Bains: “Our government has recognized sonar and acoustic systems as a key industrial capability of our globally-competitive defence and security sector. These systems represent areas of emerging technology with the potential for rapid growth and significant opportunities, along with established capabilities where Canada is globally competitive and where domestic capacity is essential to national security. This contract is a great example of Kraken Robotics leading in this sector.”

Minister of Natural Resources and Member of Parliament for St. John’s South – Mount Pearl, Seamus O’Regan: “Our Province’s businesses are competing – and succeeding – around the world. The ingenuity and spirit of companies like Kraken show how we will build back our economy stronger and better than ever.”

Darren Fisher, Parliamentary Secretary to the Minister of Health and Member of Parliament for Dartmouth-Cole Harbour: “There’s never been a better time to diversify Canada’s trade and investment opportunities, including in the defence sector. The Canada-European Union Comprehensive Economic and Trade Agreement is already resulting in new customers, clients and good middle-class jobs here at home in Nova Scotia and across Canada.”

Michael Willmott, Senior Trade Commissioner, Embassy of Canada to the Kingdom of Denmark: “It is great news that Kraken Robotics has won a major contract in Denmark with the Royal Danish Navy, with significant economic opportunities for industry in both Canada and Denmark. It shows the collaboration between our countries is strong and is an excellent example of Canada’s cutting-edge ocean technology and marine defence capabilities. With the establishment of a Centre of Excellence for Mine Counter Measures and continued focus on underwater surveillance, Kraken paves the way for even closer partnerships and a long-term presence in the Danish market. Canada and Denmark are allies and like-minded partners when it comes to security collaboration and open, rules-based international trade. This contract is a great example of what Canada and Denmark can do together.”