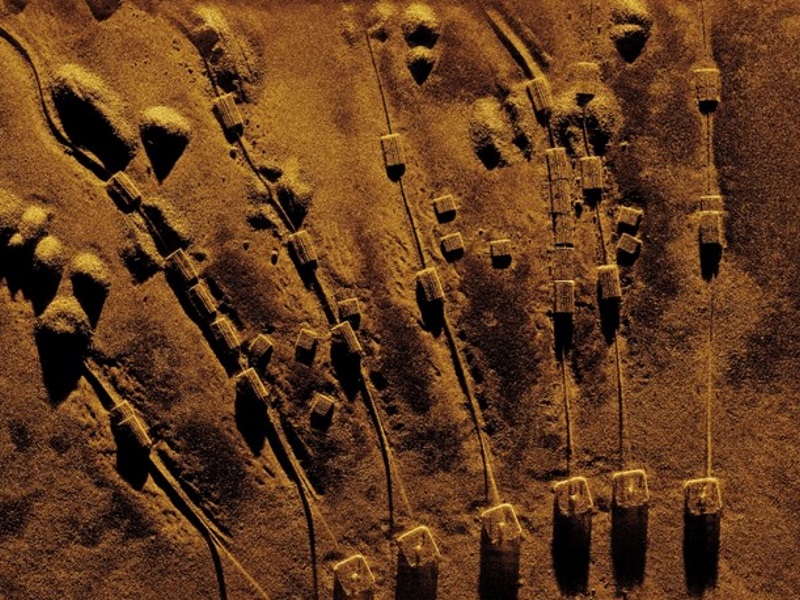 Contract Updates
Kraken has received a subsea battery order totalling $1.5 million and funding awards for $2.0 million. The Company expects to fulfill this battery contract in 2021, while the funding awards are for projects that will be executed over the coming 12-36 months. Due to confidentiality reasons, our customers and partners cannot be named but are characterized below:

*An existing defense industry customer is acquiring additional SeaPower® batteries. The contract value is $1.5 million. This is the customer’s fourth order of Kraken batteries.
*Kraken has been awarded $2.0 million of funding awards across three projects. Work on these projects will be carried by Kraken’s acoustic signal processing team in Canada, Kraken’s AI and Machine Learning team in Bremen, Germany and Kraken’s subsea power team in Rostock, Germany.

Execution of the contracts for deliveries of our SeaScout® systems to the Danish and Polish navies continues and is on track and on budget. First shipments under these contracts will occur in Q4 this year.

Products and Service-Related Update:
Underwater Vehicle Platforms
Our SeaScout® product consisting of the KATFISH™ towed underwater vehicle, Tentacle Winch®, and Autonomous Launch & Recovery (ALARS) is expected to be a key growth driver. During 2020, we completed successful sea trials of the full SeaScout® system on board our Ocean Seeker vessel and then used the system offshore for 3 weeks as part of our fall OceanVision™ campaign.

While live customer demos in 2020 were impacted by the Covid pandemic and the resulting travel challenges, we did land 2 significant contracts totalling over $40 million to supply the SeaScout® systems to the Danish and Polish navies.

We see a number of significant opportunities worldwide for this platform as customers look for a solution offering leading price and performance metrics. We have a strong pipeline of international pursuits with military (NATO and allied navies) and commercial companies. Given where we are in the sales cycle with several of these customers, we feel confident in our ability to deliver significant growth from the SeaScout® platform in 2021 and onwards.

Synthetic Aperture Sonar Sensors
Kraken continues to see growing interest in our AquaPix® MINSAS sensors, and specifically an interest by numerous AUV manufacturers to evaluate and integrate Kraken’s MINSAS in their AUV offerings to customers. Teledyne Gavia recently integrated Kraken’s MINSAS on their Gavia AUV in Iceland and noted “The increased range and resolution and associated higher Area Coverage Rate of MINSAS over traditional systems can significantly expand the capabilities of Teledyne Gavia AUV systems for a variety of tasks for naval, scientific and commercial applications.” To date, Kraken has seen its Aquapix® sensors integrated on more than 15 different underwater vehicle platforms from a variety of manufacturers.

In 2020, Kraken completed development of a new, low-power, man portable AquaPix® MINSAS sensor, and made its first two product deliveries to the United States Navy under the Foreign Comparative Test program. End user evaluation continues in Q1 2021 and Kraken expects this new product to be well received across a number of North American and international defense opportunities. We believe our AquaPix® MINSAS sensor is gaining traction as it has been bid and is being incorporated into numerous RFI and RFP responses from larger defense companies and AUV manufacturers on notable upcoming programs.

Kraken is pleased that the Canadian RMDS (Remote Minehunting and Disposal System) program appears to finally be becoming a reality as the RFP is expected to be released in Q1 of this year. The stated objective of this program is: to develop a modular, stand-off Naval Mine Countermeasures capability, designed to provide the full spectrum of Naval Mine Hunting operations and contribute to underwater domain awareness. RMDS will generate the capability to detect, classify, localize, reacquire, identify, and dispose of sea mines and Underwater Improvised Explosive Devices, that pose a threat to Canadian and allied interests or impede the conduct of maritime operations. The RMDS project intends to leverage proven Commercial off the Shelf unmanned systems and Autonomous Underwater Vehicle (AUV) technology. These RMDS payloads will contain modular sub-systems that are portable and deployable. The Canadian government preliminary estimate for this contract ranges from $20 million to over $40 million. Kraken intends to partner with several large defense contractors on this bid.

Subsea Power
In subsea pressure tolerant batteries and thrusters, 2020 was a more challenging year as non-defense customers slowed their spending and an expected ramp in thruster sales with a new customer was impacted by the Covid pandemic on the customer’s product demand. Kraken did however see continued progress with defense customers and is working on several R&D initiatives with these customers. Kraken is also working towards US Navy and offshore energy certification for its batteries which will increase the company’s opportunities in the defense and commercial markets. As noted above, Kraken recently received its fourth order from a US defense customer. Going forward in 2021, Kraken is seeing signs of increased opportunities for battery sales and new orders from its notable thruster customer. During Q4 2020, Kraken Power moved into 10,000 square foot of production and office space at the new Ocean Technology Campus in Rostock, Germany. This facility provides space for additional battery and thruster production as well as the ability to insource deep sea rated pressure testing which should improve margins and customer delivery times.

Robotics as a Service (RaaS)
While Kraken has historically been focused on new product development and product sales, with the launch of OceanVision™, a 3-year, $19 million project funded by the OceanSupercluster, industry partners and Kraken, we are currently developing a RaaS business. Under OceanVision™, Kraken continues to develop new sensor and underwater vehicle technologies and trial and test them during several offshore technology demonstration campaigns. We expect a busy 2021 in the field with offshore campaigns planned for the Spring (starting in May) and Fall (starting in September). This will include the acquisition of ocean data from offshore Nova Scotia and Newfoundland and Labrador as we continue to demonstrate our technologies to our industry partners in the fishing, oil and gas, cleantech and ocean survey industries.

In addition to providing full-service capabilities from our research vessel Ocean Seeker, Kraken is commercially partnering with larger service companies to bid on various offshore service opportunities, across both survey and inspection opportunities. Kraken has numerous commercial pursuits in survey and inspection RaaS covering offshore oil and gas and offshore wind in North America, South America and Europe.

As part of our growth plans in services, Kraken is recruiting dedicated personnel and adding new equipment to service a customer base domestically and internationally and is also recruiting a senior hire to lead the Company’s services business.

Research and Development Efforts:
Kraken continues to invest significant resources in R&D. The following is a status update on some of our key R&D programs covering innovative sensor technologies and new underwater vehicle development:

*Software:
*Seamless SAS – Seamless SAS is an advanced processing technique which enables SAS processing on a ping-by-ping basis. This allows the end-user to build SAS images in along-track lengths which custom fit their mission planning, instead of standard 50 m along-track tiles. Seamless SAS makes for sharper imagery as intensities are not averaged over tiles and provides a better visual representation of the seafloor. Kraken expects commercial availability of seamless SAS in Q2, 2021.

*Nadir Gap Filler – Similar to sidescan sonar, SAS has a coverage gap directly below the platform known as the nadir gap. Other nadir gap coverage technologies have been fielded using real-aperture sonar technology, however these other technologies have the distinct disadvantage of low-resolution and thus are not comparable to ultra high definition SAS imagery. In late 2020, Kraken introduced a unique gap reduction technique that combines a short-range SAS designed to reduce the nadir gap, with a 3D laser profiler to provide complete nadir gap coverage. Results demonstrated centimetric (SAS and laser) resolution across the complete nadir gap with a high speed towed SAS system operating at 10 m altitude. When combined, the sensors can provide full swath coverage that results in a very significant increase in area coverage rate.

*New Sonar Data Formats – As part of Kraken’s commitment to continuous improvement and supporting the latest technology developments, Kraken is in development of a native HDF5 output format for the MINSAS line of sensors. By providing this output, it allows the operators and MCM analysts to use their existing PMA toolkits and ATR, allowing easier integration of Kraken systems into existing data workflows and government programs. Kraken expects HDF5 support to be completed in Q2, 2021.

Dive LD AUV:Kraken will take delivery of the DIVE LD AUV in Q2, 2021. This long-range survey AUV will integrate Kraken’s AquaPix® MINSAS 120 sensor as well as Kraken’s SeaPower® batteries. Kraken will use the Dive LD AUV in its RaaS offering, providing turnkey survey and inspection capabilities for offshore customers.